Time Thieves and other crap

My blog is in my head most of the time.  I think to myself "I must write this" or "I'd love to share that".  So where does the time go?  I think there must time thieves hiding in my house who steal all the little chunks of time that I could wisely use to hit the keyboard.

You probably have time thieves in your house too.  The ones that stop you from doing all those jobs you meant to do.  The little bastards that fills your drawers and cupboards with crap like perished rubber bands, odd screws, broken pencils, dried up biro's and ten years worth of supermarket receipts, then won't give you time to have a good clear out!  Yep, you're a fellow sufferer too.  I can see it.

My time thieves (in random order): 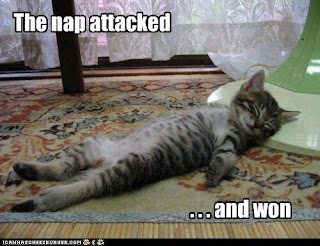 
So, perhaps you're wondering about my post-op recovery.  So am I to be honest.  Yes I recovered, and certainly enough to get around and resume normality, though not entirely pain free.   However, after my post operative check up the consultant told me that they'd missed a joint and that it would have to be done again.  Yes, you read that right.  It needs to be done again.  That was in November.  A further check up revealed that I didn't need it doing again.  It was inflamed tendons between the joints.  Various things could be done about that, including tendon compression.  It would still involve an operation but this time with a boot for the recovery.

I am so pissed off with being messed about by the orthopedics department that I had a bit of a rant, said I couldn't face a third operation inside two years and what (if anything) could they possibly offer as an alternative?  Steroid injections.  That's all.

Ok, so I had one last December which worked really well for three months. I was pain free, and while not exactly dancing on the ceiling I could get about fine.  My body felt better, I had no other aches or pains and I didn't touch a painkiller for at least two months.

Further check up in April and yes I could have yet another steroid injection.  I had that last month and it last all of three weeks.  To be fair they did warn me that successive injections would probably not last as long as the first one.  Well they were bang on with that one.  The only thing they seem to have got right.  I'm back at square one now and have absolutely no idea where to go from here.  I see the consultant again next month.  Perhaps he'll write in my notes that I'm stroppy and exasperated! 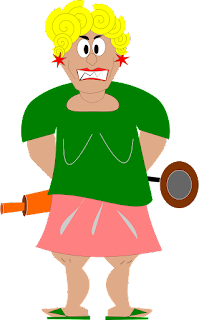 Posted by Penguin's Waddle at 22:55 No comments:

Day #8 and beyond without plaster cast

Hey, how have you been?
Seems like I've been on a hiatus.  It also seems like every blogger on the planet has a hiatus every so often.  It wasn't deliberate. It never is.  Well, that's my excuse anyhoo.  However, it was one of those "Round tuit" procrastinating times when I should have got my fingers out of the biscuit tin and on to the damn keyboard!
Just to prove such things exist, here's an image (from ebay) of ....wait for it.......drum roll please......A ROUND TUIT!! 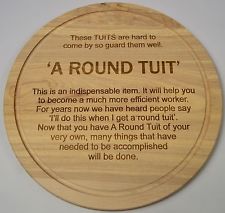 Well, who knew?  AND they come in all manner of sizes, some ceramic, some handpainted.  Check them out here for Round Tuits, and get one as a Christmas pressie for your favourite procrastinator!


So here's a few things that happened to me in the last week: 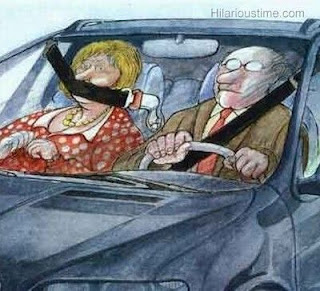 (Apologies for all the above being in dialect.  Grumpy Trousers does't speak in Queen's English.  Let me know if you need it translating)

So all this happened on Sunday as I said.  We ended up at a little shopping village out in the Peak District about an hour from home.  I like this place as its flat, has a small selection of useful shops, and a larger selection of useless ones that sell everything you never knew you wanted.  Example, gorgeous scarves, fragrant candles, driftwood sculptures, handmade cards, wooden ducks in sets of 3, and for some reason life-size painted metal cockerels - go on you know you've always wanted a life-size painted metal cockerel.  No?  Well,that's YOUR Christmas present up the spout then!

Seriously, given my obvious lack of imagination, what would you do with a life-size painted metal cockerel if you were given one as a gift? Too big for the kitchen window sill, just not quite right for the living room. Hmm, bung it in the garden then.  In a bush.  In fact BEHIND a bush, where it can't actually be seen!  Better still, pop down to the Charity Shop and make it a donation.  I'm sure it would look wonderful in their window display and encourage custom.  Just thought of an even better use - donate to local church for use at Harvest Festival time.  What a cracking idea!  It could stand guard over the copious amount of eggs that are given at this time.  See, I'm warming to the idea of life-size painted metal cockerels now.  In fact I might come over all giddy. 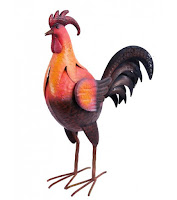 Anyway, that's last few days, such as they were.  We're half way through this week already.  Don't they call it Hump Day? 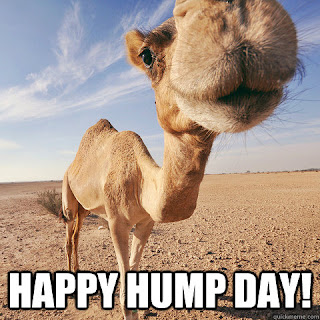 Posted by Penguin's Waddle at 19:09 No comments:

Bradley Walsh's giggling fits on The Chase are the absolute best

Posted by Penguin's Waddle at 17:55 No comments:

I never was one for obeying the rules!  Show me how to make life comfortable and I'll do it..... 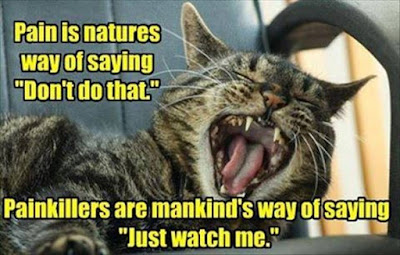 Posted by Penguin's Waddle at 13:57 No comments:

Days #3 to #7 without plaster cast

I had hoped to to a daily diary of life without the cast but it's not worked out that way.  Grumpy Trousers is doing a family timeline thing (to do with his Genealogy research) and has hogged the better of the two computers we have.  That left me with a laptop that not only runs at a snails pace, it also freezes for about 10 minutes at a time.  I'm sure you can imagine the frustration!

Today, Grumpy Trousers has gone out to the dentist so joy of joys, the very efficient desktop computer is free.  Apart from the cat who was enthroned on the office chair. With a little encouragement she moved to alternative accommodation.  Ok, the reality was ....."Gerroff that chair!"  With a filthy look cast in my direction she yawned, stretched, stuck her nose and tail in the air and wandered off to the spare bedroom.  In her own time.  Cats! 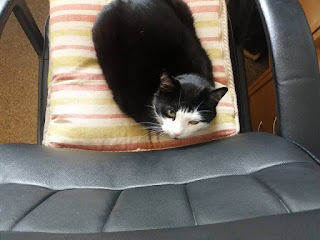 and this is the after pic.......she looks much more comfortable don't you think? 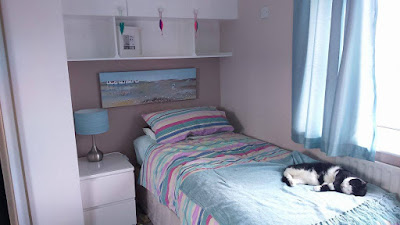 Anyway, I digress. So, days 3 to 7 have been pretty much of a muchness to be honest. Waaaay to much sitting around waiting for painkillers to kick in, but it's necessary. Working through pain in the hope that it would just bugger off of its own accord doesn't work does it? It seems patience wins the day. Combined with Paracetamol and Ibuprofen.  So if I'm planning an outing, I dose myself up, wait around half an hour then seemingly I'm good to go.  My limitations of standing and walking about seem to be around 10 - 15 minutes for now.  Not much, but better than this time last week.

Today, I'm having a lunch outing with my close friend B who is also a neighbour.  She's also retired and we enjoy the occasional lunch and shopping trip.  Seeing as she's just arrived to pick me up, I'll finish this posting later!

10.00pm
We had such a nice day!  I haven't been very far for almost 8 weeks, and last weeks outing to the mall was really tiring and had to be cut short.  Today, I survived much better so clearly I'm getting stronger.  We paid a visit to The Range, which if you live outside the UK is one of those shops full of everything you didn't know you wanted!  I came away with a bunch of silk flowers and some  wallpaper samples.  Bizarre combination of purchases I know, but I have eclectic tastes that are reflected in my shopping habits!

I'll do a separate posting about why I purloin borrow wallpaper samples from DIY stores. 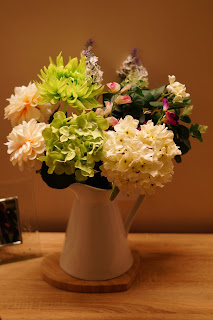 I bought the silk flowers  as my gift flower supplies have now stopped. I've kind of missed having flowers around  so for the price of a fancy bunch from the supermarket that will last around 2 weeks, I got these from The Range.  I wanted the big Hydrangea heads, and B helped me choose the rest. Looks rather cottage garden doesn't it?

So that was that.  I got back in the car with my foot throbbing and my shoe feeling very tight, and off we went to a Farm Shop for lunch.  I love farm shops; all the veg is tastier than the overpriced crap you get in supermarkets.  The meat is straight off the farm so it's not full of hormones, antibiotics and water.  It's all as it should be.  B and I sat chatting, and generally having a great indulgent time over lunch for an hour, giving my foot a well earned rest, then spent a small fortune on farm shop goodies.

I have to admit I was glad to get home.  I just wanted an ice pack on my foot but I had a great time and (almost) forgot my pain. 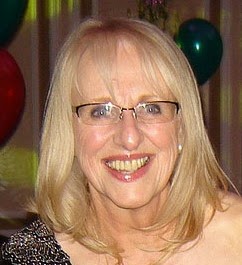